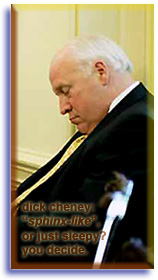 Dick Cheney may be the most pungent former political hack this nation has ever known. I guess he still doesn’t see that over seven years of his assinine policies are the reason we are where we are now. Actually, the truth is that he knows he is the cause of this mess — and he is seeking to rewrite his personal history, via churlish grandstanding.

We’d all do well to simply ignore this old man’s blather. He is sort of like the blowhard uncle who shows up at Christmas-time, claiming to be all sorts of things he’s not. It would be be simply silly, rather than sad, if Dick didn’t still have loyal “leave-behinds” inside the intel community, feeding him classified information — and thus commiting acts of treason. [He is no longer entitled to receive classified information — not without the specific approval of the current White House. I can guarantee you that permission has not been granted.]

From the New York Daily News, then:

. . .Pfeiffer went further, saying that it was the Bush-Cheney focus on Iraq that led to Al Qaeda’s strengthened presence in Afghanistan and Pakistan and that President Obama is now making America safer by employing a strategy that focuses more resources on Afghanistan.

“To put it simply: This President is not interested in bellicose rhetoric. He is focused on action,” Pffiefer wrote. “Seven years of bellicose rhetoric failed to reduce the threat from Al Qaeda and succeeded in dividing this country. And it seems strangely off-key now, at a time when our country is under attack, for the architect of those policies to be attacking the President. . .

First, note that the image, at right — of Dick Cheney’s forehead — contains his own handwritten notes, about U.S. Ambassador Joe Wilson, made in the margins of a July 6, 2003 New York Times opinion piece he read on his way back from Jackson Hole, Wyoming — to Washington, DC. The opinion explained — in detail — what Ambassador Wilson didn’t find while looking for evidence of any Nigerian-to-Iraqi yellowcake trading. Here it is, in context:

So, when asked about all of this, by the FBI Special Agent, a little less than one year later — Dick Cheney could not at first recall whether he and Scooter Libby had ever discussed Joe Wilson’s trip as “a junket“. All sources put Scooter Libby with Dick Cheney, in Jackson Hole on that July 4 weekend. What are the odds that — if Dick Cheney took the time to make a note — in his own hand, thus: “Did his wife [Valerie Plame] send him [Wilson] on a junket?“, on the plane back to DC, that day, that he didn’t already know Plame was CIA, and that Joe Wilson had “outed” one of the central lies embedded in the 16 words? [Later, perhaps recalling his handwritten notes, Cheney allows that it is “possible” he and Scooter discussed the trip, as a junket or boondoggle.]

It seems unfathomable, that such a sharp political mind as Mr. Cheney is reputed to possess, would have made an entirely trivial note on Air Force Two, then done nothing about it — and in fact, forgotten it entirely, for almost a year. But, in order to decide that Mr. Cheney was not at least winking and nodding in the director of Scooter Libby, about Valerie Plame and Joe Wilson — we must assume just that unlikely set of occurences. That he wrote the note for no reason, watched the ensuing debacle unfold — about the falsity of the 16 words. . . and never pursued any method to blunt the impact of these highly-damaging revelations. Go figure.

Moreover, what are the odds that he would not have tasked Scooter Libby with throwing up a fog of disinformation, to cover the Veep’s (and, potentially, the President’s) tracks — about the clear-falsity of the 16 words in the President’s State of the Union address — words used to begin the war in Iraq?

Slim to none. Slim — to none. Let’s talk to Eric Holder about a special prosecutor, again. Related: Do go read the Atlantic Wire blog piece — on these developments.

. . .Cheney was publicly implying that he would have had the authority to declassify Plame’s identity. Perhaps this was just an attempt to make people ignore inquiries like mine. But it’s just as likely that when Cheney realized that Libby had testified he had ordered Libby to leak stuff to Judy Miller (this happened the same weekend Cheney shot an old man in the face!), he wanted to give Libby the impression that his own testimony protected Libby from an IIPA violation.

But it didn’t. Judy’s unreliable testimony saved Libby. But without that, Cheney’s own testimony would have been the evidence Fitzgerald would have needed to charge Libby with deliberately outing a CIA spy. . .

Will Someone Indict This Lothario, Already, Pleeeeze?

From the FBI’s May 2004 Inteview Notes, regarding an interview of Dick Cheney, then-sitting Vice President of the United States [click image to enlarge]:

Note that these “lack of recollections” are at variance with every other piece of evidence gathered, and then presented to the jury — in Scooter Libby’s perjury and obstruction of justice trial.

It is time to indict this man. There is little doubt that the above passage reflects a very carefully-couched set of lies — about when and how Dick Cheney first learned of Valerie Plame’s role at CIA; and thus covers his likely hand in having her outed — in retribution for Joe Wilson’s work debunking Niger yellowcake to Iraq stories as fabrications. Of course, those fabricated stories were a large part of the justification offered, by this Vice President, and Bush43, for our military engagment in Iraq.

“these aren’t the droids you’re looking for.”

a “star wars” line — put to perfect use.

Per EW’s able direction, we learn that the best of today’s print came from across the pond — The Guardian (UK) claims that

. . .One of the most sensitive areas has been what we do in friendly countries that don’t want to co-operate or maybe we don’t have enough confidence to entrust them with information. If you have an al-Qaida guy wandering around certain bits of the world we might decide that we need to deal with that ourselves, directly, without making a lot of noise,” he said. “There was a plan to deal with that. It was much talked about in the CIA and the military had its own operation.”

Another former senior intelligence official responsible for dealing with al-Qaida said that assassination plans were reined in after similar covert operations by the military were botched and proved to be embarrassing, particularly the killing in Kenya. He did not give details of the operation. . .

There appears to be common agreement among knowledgeable former intelligence officials that the controversy goes beyond the immediate question of assassination and capture of al-Qaida operatives. . .

Quick — who did we kill, and badly, in Kenya? Any guesses? A two second Google search turns up this coverage, in The New York Times:

. . .Neither of the opposition lawmakers killed this week [February 1, 2008] was especially prominent. Both were just weeks into their new jobs as national politicians. Opposition leaders, however, say that is not the point. The opposition holds a slight edge in Parliament, and its leaders contend that the government is trying to reduce their numbers, an accusation it denies.

On Tuesday, Melitus Mugabe Were, a lawmaker and businessman who grew up in a slum, was shot to death in his driveway by two gunmen. The police are closely investigating the killing, but Mr. Were’s friends and family say he was not robbed and that the killing was a professional hit. . .

As ever, there will be more, on this — and that, as it is now reported, by Scott Shane, that then-CIA Director Hayden ordered the secret program scaled back, after he first learned of it, in the Spring of 2008.

That would be only several weeks after this “professioanl hit” — in Kenya.

By the way, neither of the dead Kenyan legislators had any known ties to Al Qaeda. [Which, sadly again, echos a sub-plot of the first installment of the Bourne trilogy — the (first-failed, then ultimately completed) killing of a Sub-Sarahan African reformer, named Nykwana Wombosi (played by Adewale Akinnuoye-Agbaje). I do not mean to trivialize this, but it is possible that Cheney’s evil is just this banal — to follow, and closely, some impluasible movie script.]

Scott Shane (about 20 minutes ago) at The New York Times has filled in much more detail, here, going well-beyond what was learned from The Wall Street Journal, overnight — do go read all of this meaty new article:

. . .The program was designed in the frantic weeks after the Sept. 11 attacks when President Bush signed a secret order authorizing the C.I.A. to capture or kill Qaeda operatives around the world. To be able to kill Osama bin Laden or his top deputies wherever they might be — even in cities or countries far from a war zone — struck top officials as an urgent goal, according to people involved in the discussions.

But in practice, creating and training the teams proved to be difficult.

“It sounds great in the movies, but when you try to do it it’s not that easy,” said one former intelligence official. “Where do you base them? What do they look like? Are they going to be sitting around at headquarters on 24-hour alert waiting to be called?”. . .

But Congressional Democrats were furious that the program had not been shared with the committees. The Senate and House oversight committees had been created by law in the 1970s as a direct response to disclosures of C.I.A. abuses, notably including assassination plots against Patrice Lumumba in the Congo, Fidel Castro in Cuba, and other foreign politicians. In addition, President Gerald Ford in 1976 issued an executive order banning assassinations.

But the ban does not apply to the killing of enemies in a war. . . [And, apparently, Bush took that position.]

Hina Shamsi, an adviser to the Project on Extrajudicial Execution at New York University, said such a calculation about inserting a kill team would include the violation of the sovereignty of the country where the killing occurred; the different legal status of the C.I.A. by comparison with the uniformed military; and whether the killing would be covered by the law of war.

“The issue is a complex one under international law, and it encompasses all of the contentious issues of the years since 2001,” Ms. Shamsi said. . .

Wow. I hate being right, all the time — about the Dick. I really do.

The Capitalists’ Paper of Record, the Wall Street Journal, is reporting (as of about 10 minutes ago!) that the “unspecified” CIA program Cheney ordered the agency to withhold from legally-required Congressional intel briefings, and the Gang of Eight, more precisely, was a “covert capture or kill”* operation.

. . .capture or kill al Qaeda operatives, according to former intelligence officials familiar with the matter. . .

. . .In 2001, the CIA also examined the subject of targeted assassinations of al Qaeda leaders, according to three former intelligence officials. It appears that those discussions tapered off within six months. It isn’t clear whether they were an early part of the CIA initiative that Mr. Panetta stopped. . .

So, the Republican defense tactic here, will be to “dress it up” — as a program to carry out a presidential directive.

One would think that CIA Director Panetta would have asked whether the program was pursuant to a presidential order, or finding, before briefing Congress, in late June.

So — I suspect — the actual “Blackbriar/Treadstone” project Cheney kept under wraps for eight years, will turn out to be something else. Something broader, or more specific — but not something that Bush had ordered be carried out, with specificity.

* In this scene from the second installment of the “Bourne” trilogy — depicted, above (click to enlarge) — Jason Bourne (armed with nothing but a tape recorder) extracts a confession (about unauthorized assassinations of international political leaders), from his CIA branch chief.