Blackwater Guards’ Nisour Sentences: One — Life In Prison, And 30 Years. . . For Three Others. Justice. 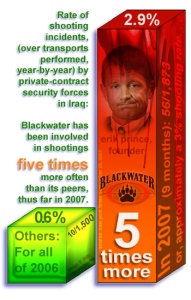 Here was the October 2014 verdict(s) — yesterday was the sentencing. Deeply delayed, but plainly the right outcome.

The New York Times has it all:

. . .One by one, four former Blackwater security contractors wearing blue jumpsuits and leg irons stood before a federal judge on Monday and spoke publicly for the first time since a deadly 2007 shooting in Iraq. . . .

In Iraq (pre 2006), Blackwater was perceived as so powerful that its employees could kill anyone and get away with it, said Mohammed Hafedh Abdulrazzaq Kinani, whose 9-year-old son, Ali, was killed in Nisour Square. . . .

No longer. Good riddance, Mr. Prince. Once again — all this blood is primarily on Dick Cheney’s hands. But it is on W.’s, too.